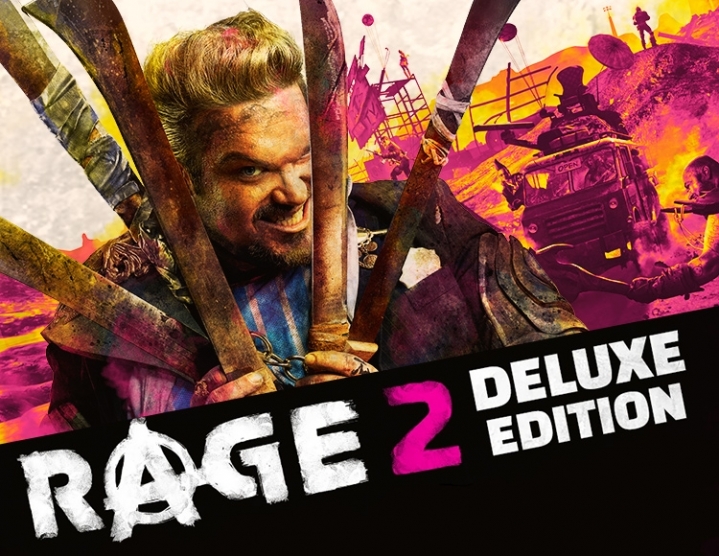 Description:
The composition of the publication:
Supplement "Rise of Ghosts", which will be released before 12/31/2019
DOOM BFG
Cheat "Mage of the Wasteland"
Battle Standard
Progress accelerator

Immerse yourself in a post-apocalyptic world in which there is no law, no order. Avalanche Studios, the recognized wizards for creating open worlds, and id Software shooter gurus represent the game RAGE 2.
Here you can go anywhere, shoot at anything and blow what they want. The asteroid that fell on Earth destroyed 80% of the population, and the number of survivors continues to decline. The bloodthirsty gangs wander along the roads, and the tyrants from the Government are trying to establish their boundless domination. Your hero is Walker, the last ranger of the Wastelands. In an effort to retain power, the Government deprived you of your home and almost took your life. You have only one way out: to join the uncompromising struggle for freedom and justice. Waiting for you is a real chaos: indescribable skirmishes with a first-person view, a variety of vehicles and the open world of the wastelands.

Traveling through it, you must survive in clashes with ruthless thugs and find the technology necessary to combat the despotic government.

Features:
THE UNIVERSE, WHERE THE SHOTS DON´T SLOW DOWN FOR A MINUTE
The creators of id Software shooters and specialists in open worlds of Avalanche Studios have teamed up to make their dreams come true in RAGE 2.
This is not just an open world shooter, but a whole universe, where shots do not fall silent.

EMPTY WAIT
Overcome impassable thickets, treacherous swamps and burned deserts to get to the Government. The wastelands are huge, but your arsenal will allow you to fight for every inch of this treacherous land.

PEDAL IN THE FLOOR
Ride with a breeze on the beaten up life, but transport, adapted to the relief of the wastelands. These huge trucks and gyroplanes are one thing in common: you can manage all of them!

LAST RANGER
Teach your enemies a lesson! You have at your disposal a whole collection of weapons that can be improved, as well as the destructive power of nanotrites and “fast and the furious” - the ability with which you can overcome the technical limitations of your guns.

Gangs and opponents
Fight for a scorched earth with gangs of madmen, mutants and bloodthirsty monsters.

Injustice: Gods Among Us Ultimate Edition