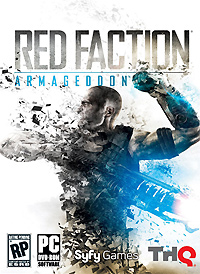 Petrovka information about the seller and his items
offlineAsk a question

After payment of the pre-order you get a link on which the official day of release you will be able to see the license key (CD KEY) out of the box with the game Red Faction: Armageddon from the official distributor - the company "Buka" to activate the system Steam.

The plot of "Red Faction: Armageddon" takes place on Mars over fifty years after the events of "Red Faction: Guerrilla", the third game of the series. Terraformer to regulate the climate of the planet, keeping the atmosphere was destroyed, leading to the destabilization of the climate to such an extent that made it impossible for people staying on the surface of the planet. Colonists have created an extensive network of underground structures, where and moved to the surface of the planet.

The protagonist of the game is Darius Mason, grandson of Alec Mason and Samani. Darius is in Bastion, underground heart of colonists. It is engaged in any life-threatening work, including raids on disfigured and destroyed the planet's surface. Randomly, he opens a mine in an old Marauder temple, which leads to the awakening of long-dormant evil forces. Over the Martian colonists in mortal danger, and Darius, together with the Red Brigade will destroy it.

For us it is very important your positive feedback :)