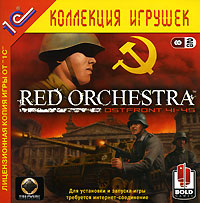 Take part in the toughest and bloodiest battles of the Great Patriotic War. Fight the enemy alone or together with friends, as part of an infantry squad or armored units. Witness the grand battles, the outcome of which depended the future not only of your country but also around the world.

Features:
* Red Orchestra: Ostfront 41-45 - military-historical action, which tells about the events of the Great Patriotic War, and differs from other similar games played high reliability events.
* Fought in the infantry or armored troop units by selecting one of several military specialties.
* 24 types of weapons, created based on the actual ballistic data: pistols, submachine guns, machine guns, shotguns and rifles.
* Managed 14 military vehicles, including present the most successful model of the German and Soviet tanks. You will be able to take the place of any of the crew members.
* Optical and ballistic properties of the shells of military equipment, as well as damage model based on declassified technical specifications.
* Anti-tank weapons, firecrackers, the ability to call air support.
* 13 cards, accurately recreating the area where the battle unfolded Eastern Front.
* Up to 32 players in multiplayer. In a single game at your disposal will be a squad of fighters - you can give orders like all divisions and each soldier personally.
* Support for voice communications (VOIP) between the teams, units and crews of combat vehicles.

Immediately after payment you receive fotoskan key out of the box. The key (serial number) is designed to activate the game and all of its network functions via Steam. It is officially distributed in Russia by production companies 1C.

Activation of the game:
1. You need to download and install Steam-client - http://cdn.steampowered.com/download/SteamInstall.msi (if not already installed)
2. Register your new account on the system Steam or go to an existing
3. Go to the "My Games" and select "Activate via Steam ...",
read and agree to the agreement subscriber service Steam, and then enter the key received after payment.
4. After activating the game will appear in the list of games and you can download it via Steam-client.