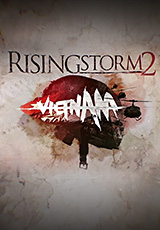 Uploaded: 06.03.2019
Content: Rising Storm 2 VIETNAM Digital Deluxe_7.txt 0,24 kB
Loyalty discount! If the total amount of your purchases from the seller GameCod more than:
If you want to know your discount rate, please provide your email:

<Attention> EDITION COMPOSITION:
- Rising Storm 2: VIETNAM
- 2 exclusive items - camouflage panamas for the armies of the States and Vietnam.
- Early access to 4 subjects (2 for each faction).
- The soundtrack of the game in digital form. </ Attention>

Meet Storm 2: Vietnam, the continuation of the "Multiplayer Game 2013" by PC Gamer´s 2013, published by Tripwire Interactive and developed by Antimatter Games, the team that created the proprietary asymmetric gameplay of the original Rising Storm.
For the first time authentic firefights and mercilessly truthful action from the first person of the Red Orchestra series comes in the era of automatic weapons, portable grenade launchers and more modern weapons systems.
Rising Storm 2: Vietnam sends players to a harsh and realistic re-creation of the Vietnam War.

GAME FEATURES:
- Large-scale battles for 64 players - In Rising Storm 2: Vietnam you are waiting for a tight tactical action for 64 players in the battles between the US Army and the forces of Vietnam. Each side has its own unique abilities and advantages, such as napalm, artillery fire, ground-to-air missiles, traps and much more.
- Managed helicopters. Players of the American team can manage three famous cars of those years: the UH-1H "Huey" transport vehicle, the OH-6 "Loach" reconnaissance helicopter and the powerful AH-1G "Cobra" attack aircraft.
"An ordinary army against the forces of partisans." Play both for the US military and for the fighters of Vietnam´s resistance. Rising Storm 2: Vietnam allows players to control both US soldiers and marines, and the military and rebel forces of North Vietnam.
- New game modes. Game modes include the classic capture of territory from the Red Orchestra, as well as new modes created for teams of 15 people or less. These new maps and modes are designed for a more team and competitive game, and reflect the small skirmishes that the war in Vietnam is known for.
- Great open realistic levels. Each map carefully recreates various episodes of the Vietnam conflict and sends players right into the center of the battles, with their incredible credibility. Among the maps you will find the famous jungles of Vietnam, as well as cities, rice fields, US bases and many other locations. In accordance with the era and place of action, on maps you will find a lot of opportunities for ambushes and flanking attacks.