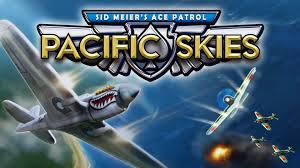 Pacific Skies - continuation published May 9, 2013 Sid Meier´s Ace Patrol, developed by Meyer and his studio Firaxis. Cetting original game - the First World War. In the sky above covered hexes (hexagon) green fields of Europe one after another automatically hunt cute biplanchiki. Battles are built around the creative use of the terrain to hide their position and camouflage airships.

Pacific Skies Action will take place in the Pacific during World War II. Hexyl painted on the water, instead of "Vickers" and "Fokker" - fighter "Zero" and daubed "under the shark» P-40. When used in the development of "real stories of pilots"; It will be playing for the American and Japanese aces, pilots and planes to customize and implement "a variety of tasks." We´ll have to take part in turn-based attack on Pearl Harbor, turn-based battle Midueyskom and discrete battle for Guadalcanal.