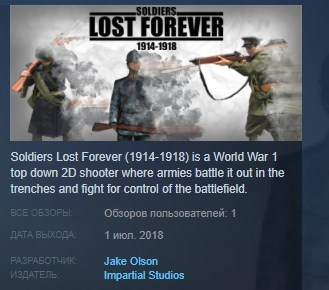 Soldiers Lost Forever (1914-1918) is a World War 1 top down 2D shooter where armies battle it out in the trenches and fight for control of the battlefield. The Economies of opposing factions are to be managed along with the responsibility of what vehicles and infantry units to send to the front.

British, French, and Canadian Nations are all at the ready.

The British Mark-V tank, French Renault-FT, and a Canadian Motorcycle are all at the player´s disposal.

Players will be able to use the Webley Revolver along with the Lee Enfield Rifle while playing as infantry.

The main mode "Total War" will have Players manage their army´s economy and decide what infantry units or vehicles to spawn on the battlefield. Infantry and Vehicular combat come together seamlessly.

"Survival" is the second mode that has the player attempt to cross no man´s land in a progressively more difficult level. The player will be able to obtain high scores and attempt to top their previous scores on a local leader board.