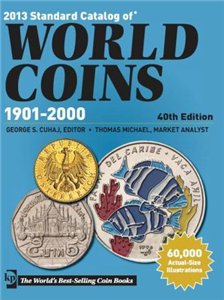 7Feets information about the seller and his items
offlineAsk a question

We present to you an online version of the catalog of Krause 20 century.
Catalog Krause contains 2372 pages, images of over 60,000 coins minted in the twentieth century in full size. The market value of coins in various degrees of safety is indicated. F, VF, XF, Unc, Proof, BU, the circulation of coins, the alloy from which coins are made, the sample of noble metal, the description of the obverse and the reverse of the coin are indicated.