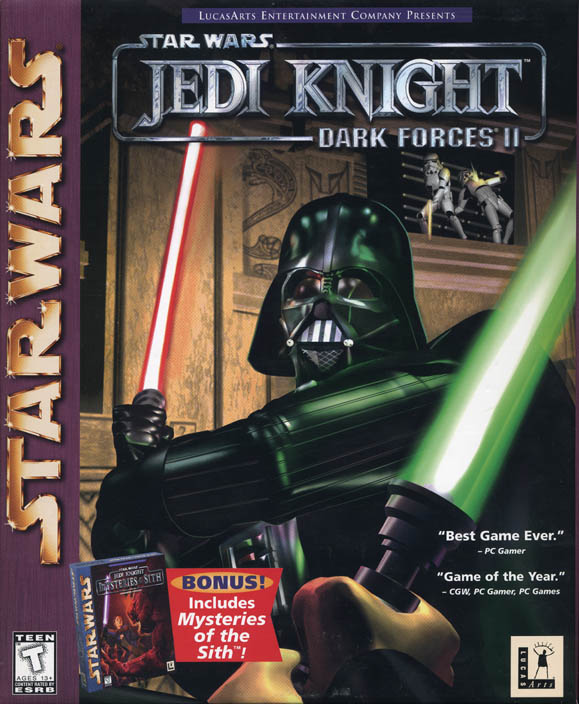 Description: Long time no hear the cheers of the fans of Star Wars, as well as games of this magnificent universe, and the street is not seen running around with a floppy players hunting for those who have already had the first part of the «Dark Force». By the way, the game fits "only" by 30 diskettes. Everyone froze in anticipation of the continuation of the series, everyone knew that it could not occur. And continued not long in coming ...

Uninvited guests here do not like: gape and crush you. So for Kyle again work nemerenoe number. Yes, all right, we will again play for Kyle Katarn. Lord, do not panic. Yes, the whole first part had to hide in the corners, and carefully shoot stormtroopers. Now Kyle - Jedi were not expecting? Of course, we expect LucasArts would make another 3D shooter game, "Star Wars" without the Jedi.

Now you finally get your hands on a real lightsaber, though not immediately, let them still have to work a little blaster, but it's worth it. And, of course, Kyle, as any Jedi can use the Force. About her, then we'll talk.

«Dark Force II» - the very first game, which was a division of abilities forces into three main components. The so-called main core capabilities, allowing Kyle to use the power jump, acceleration and several other abilities. And the two opposite sides of the Force - dark and light. Depending on your actions, you will gravitate to one of these parties, though not impossible to remain neutral. As the game progresses you will be able to enjoy the rank awarded to you, depending on your inclinations and actions. But already attained the rank of Jedi or Sith Masters, will be able to explore one of the super abilities. What? Hehe, look it up yourself.

A little about the enemy. In addition to the favorite all the poor stormtroopers and officers of the droids, the game has some semblance of fauna. There are also representatives of the animal world, which your humble servant could not be classified.

And of course, in the game there are Dark Jedi, around which revolve the story of the game. Although they are not much I not like the dark, but you do not believe them.

And finally, as always, technical and visual design of the game. Finally, there was the option to save the game during a mission, there was a multiplayer game mode. To the general joy of the opportunity to change the screen resolution and support for hardware acceleration. Yet engine «Duke Nukem 3D", brought in addition to its plus and minuses. But the game has passed in full 3D, and even though she has some drawbacks, it is very good and confident on his feet.
--------------------------------------------------
Buying from us you are guaranteed to receive a license activation key immediately after the payment.

Activation Key:
1. You need to download and install Steam http://steampowered.com/download/SteamInstall.msi (if not already installed)
2. Register novvy Steam account or log into an existing.
3. Go to the "My Games" and select "Activate via Steam ...", read and agree to the Steam Subscriber Agreement and enter the key received immediately after the payment.
4. After that, the game will appear in the "Library" section, and you can download it from steam.