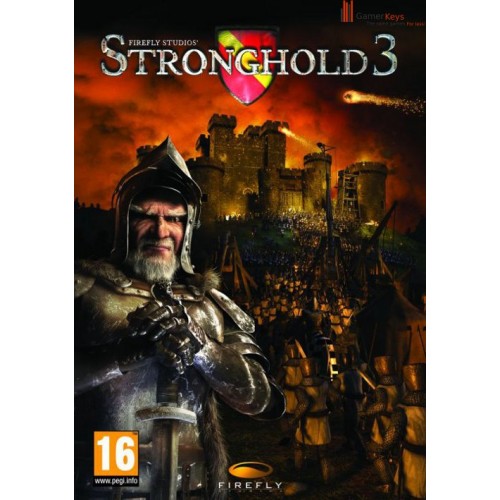 Uploaded: 22.09.2013
Content: 032.JPG 15,56 kB
Loyalty discount! If the total amount of your purchases from the seller Nickcd more than:
If you want to know your discount rate, please provide your email:

Instant delivery! Activation Key Code for the game Stronghold 3 is displayed in the browser immediately after ordering!

Devoted to the Middle Ages Stronghold series has become famous thanks to the harmonious combination of the elements inherent in different genres. Building castles and settlements, management of politics and the economy of the territories, exciting battles involving hundreds of soldiers in real time - all this is preserved and complemented by new features in Stronghold 3, created using the latest technologies.

Features Stronghold 3:
• Beautiful far. The new graphics engine Trinigy Vision Engine will translate the Middle Ages in all its glory. We will build the city. The construction process has become more realistic. Now when placing objects on the ground are not limited to the players hidden "grid": You can erect buildings, focusing on the features of the landscape and other buildings. In addition, from now on the walls of fortresses can be done not only direct but also curved, and • to create all kinds of fortifications such as bastions and insurmountable obstacles.
In war as in war. Siege, attack and defense castles are now the grand spectacle gaze players appear on the crumbling shells hit the wall, blaze building, scattering in all directions, rocks, logs and ... people.
• Night and day - day off. Night battles will be more dramatic and tense because of the extremely limited visibility. Players will have to be creative to find the enemy, hiding in the darkness of night, or on the contrary - to use the darkness to their advantage.
• Play in different ways. In a large-scale military campaign fans of the series will face powerful enemies, who was considered dead. In the economic campaign will need to pay attention to all the economic issues in order to successfully develop the kingdom. If desired, the results will be entered in an interactive rating table. In addition, the game includes the historic battle. And fans of the competition on the network Stronghold 3 will offer new multiplayer modes, which can participate up to eight players.
• Creativity. For those who like to not only play, but also to create, in Stronghold 3 provides extensive tools that can be used to create maps and share them with each other.

Obratine note:
• Pre-game has territorial restrictions (suitable only for Russia and CIS countries)! Efficiency key in other regions is possible, but we are not guaranteed.

Activation key Stronghold 3:
1. You need to download and install Steam http://steampowered.com/download/SteamInstall.msi (if not already installed)
2. Register novvy Steam account or log into an existing.
3. Go to the "My Games", select "Activate via Steam ..." and enter the key received immediately after the payment.
4. After activating the game appear in the list of games and you can download it from steam.

You can also pay attention to other games in this series:
Stronghold Crusader 2 - https://plati.market/asp/pay.asp?idd=1774371