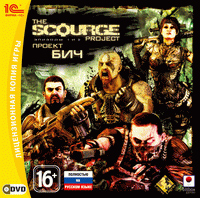 Uploaded: 14.02.2014
Content: text 55 symbols
Loyalty discount! If the total amount of your purchases from the seller GameMarket more than:
If you want to know your discount rate, please provide your email:

GameMarket information about the seller and his items
onlineAsk a question

The Scourge Project: 1 and 2 - the near future. Mega-corporations "Nogaro" almost completely controls the world economy and politics, as ragweed has a secret - a powerful source of energy. However, there are still people who have the courage to resist the monopoly. The task team of elite mercenaries "Echo" - secretly landed on the island Nogaro, to penetrate into the heart of the corporation and steal a piece of meteorite, used to create ambrosia.
However, during the landing of mercenaries waiting for a nasty surprise ... Surrounded by enemies, whether fighters "Echo" to break through the swarming monsters laboratory "Nogaro"?

• Campaign for The Scourge Project: 1 and 2 for passing a joint four participants.
• Four characters, each - with unique abilities.
• Ability to quickly push of a button, give the order to any team member.
• 9 types of weapons - every soldier will choose for themselves suitable.
• Multiplayer modes: mortal combat - with support for up to sixteen players; Command mortal combat; "Capture the Flag" and "capture area" on special maps.
• 37 advances in a single campaign The Scourge Project: 1 and 2, and in the game over the network.

Right after the payment you will receive a license key fotoskan out of the box (the publisher 1C). This switch is designed to activate on Steam.