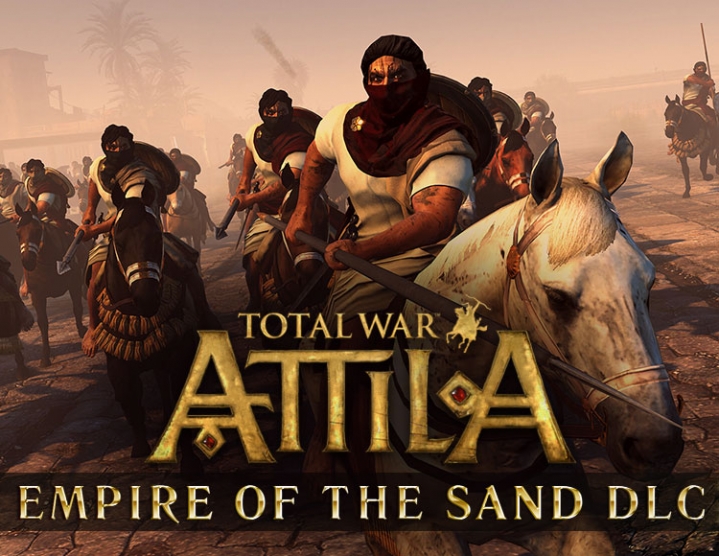 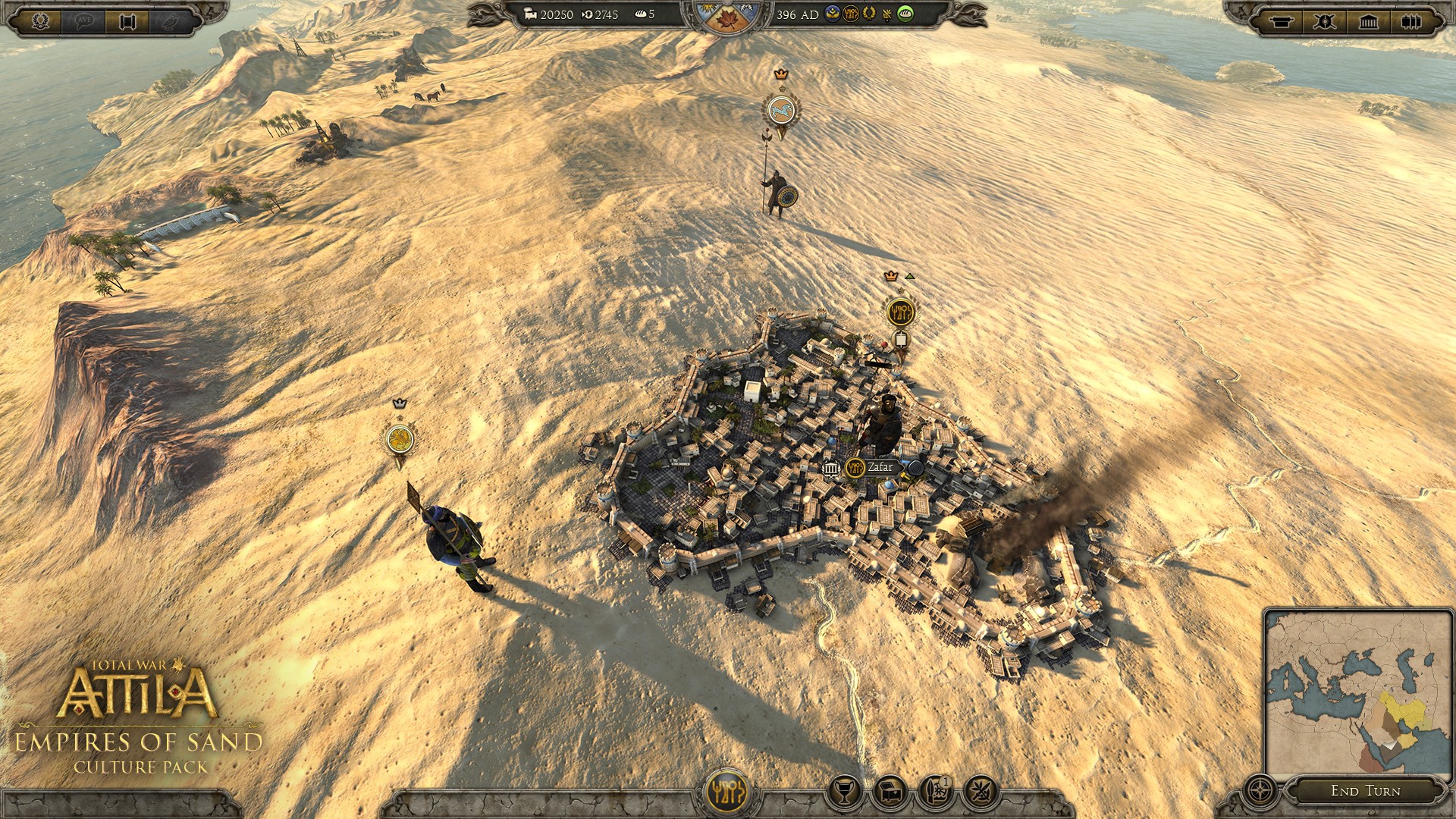 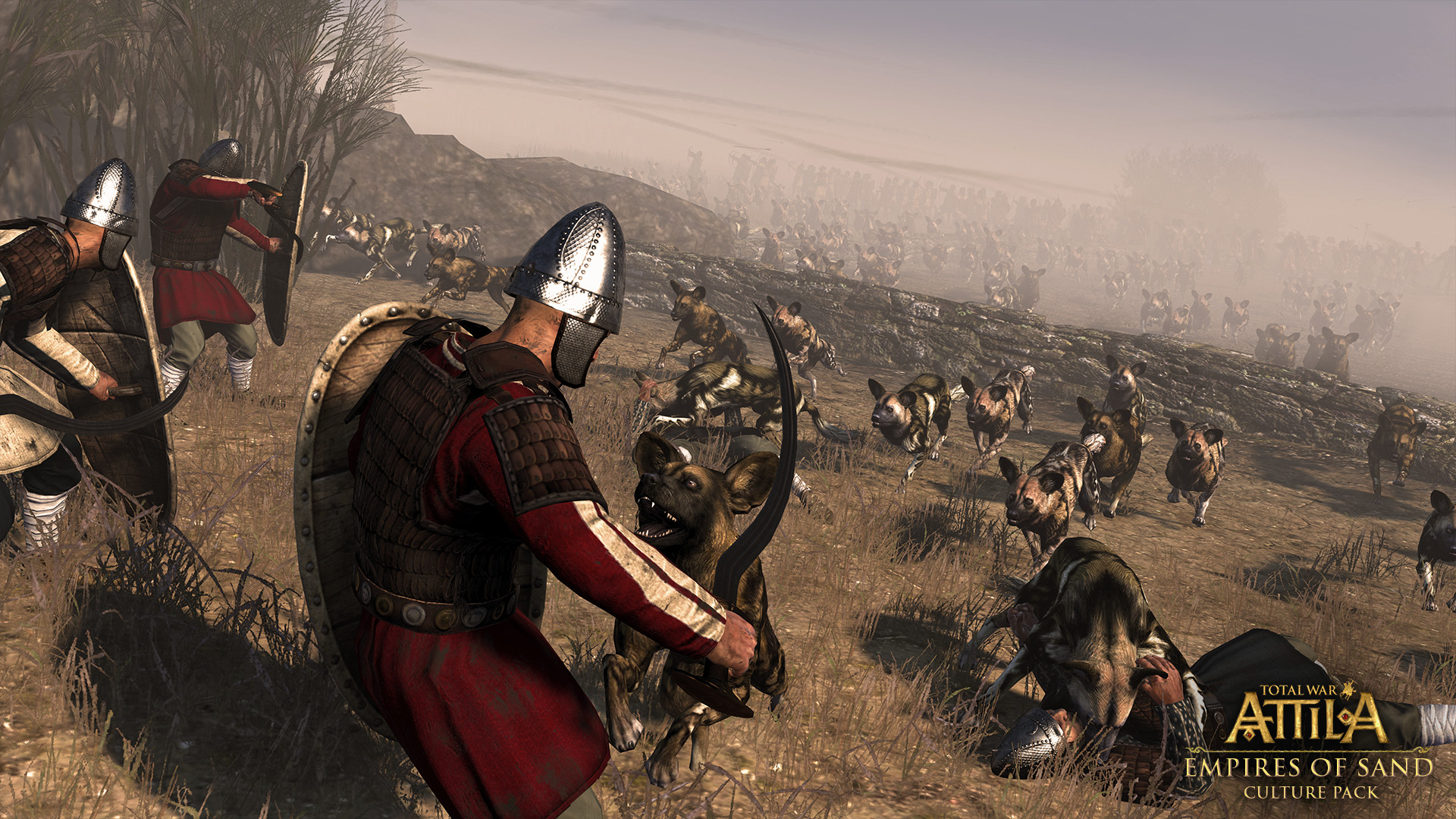 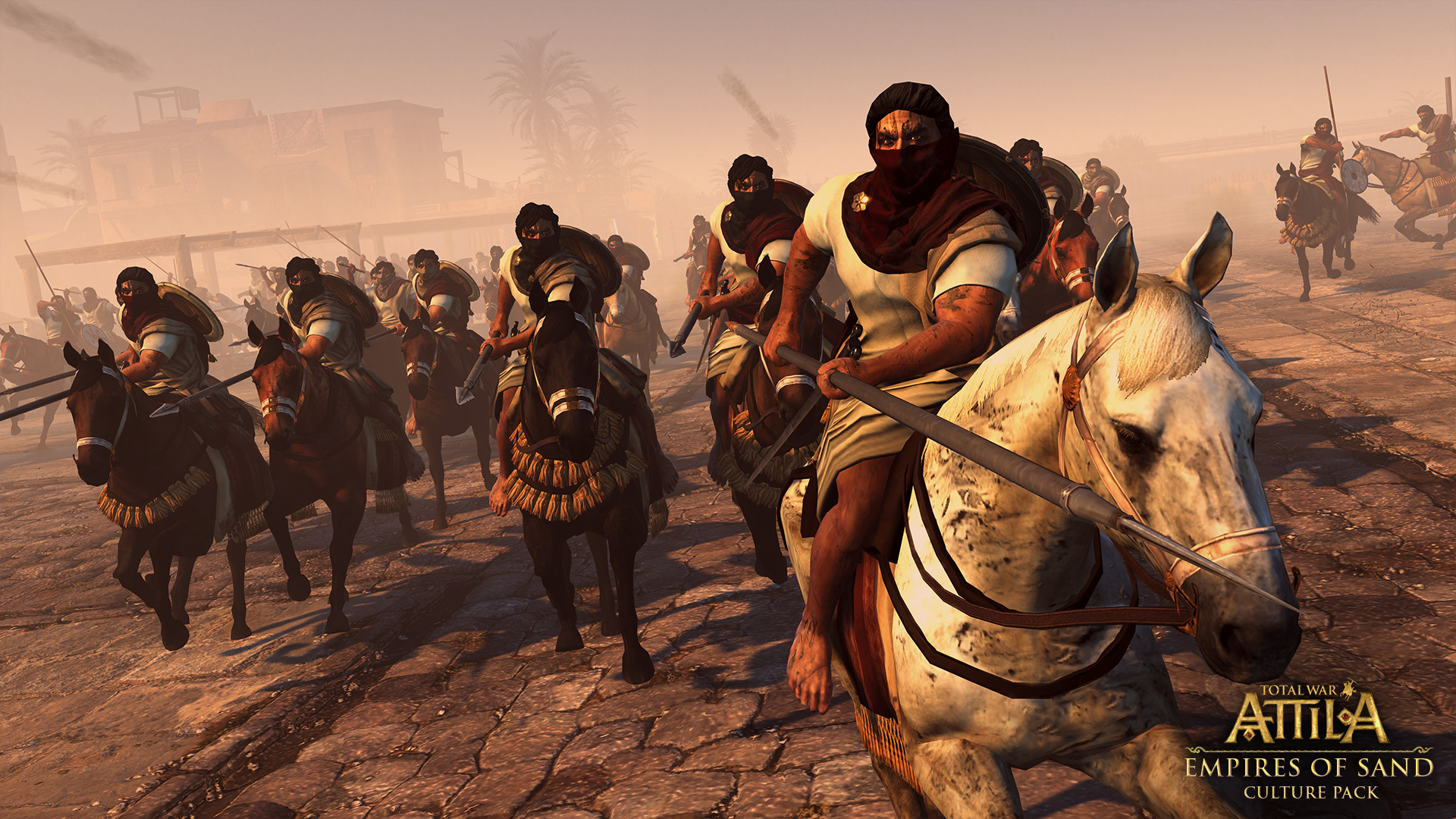 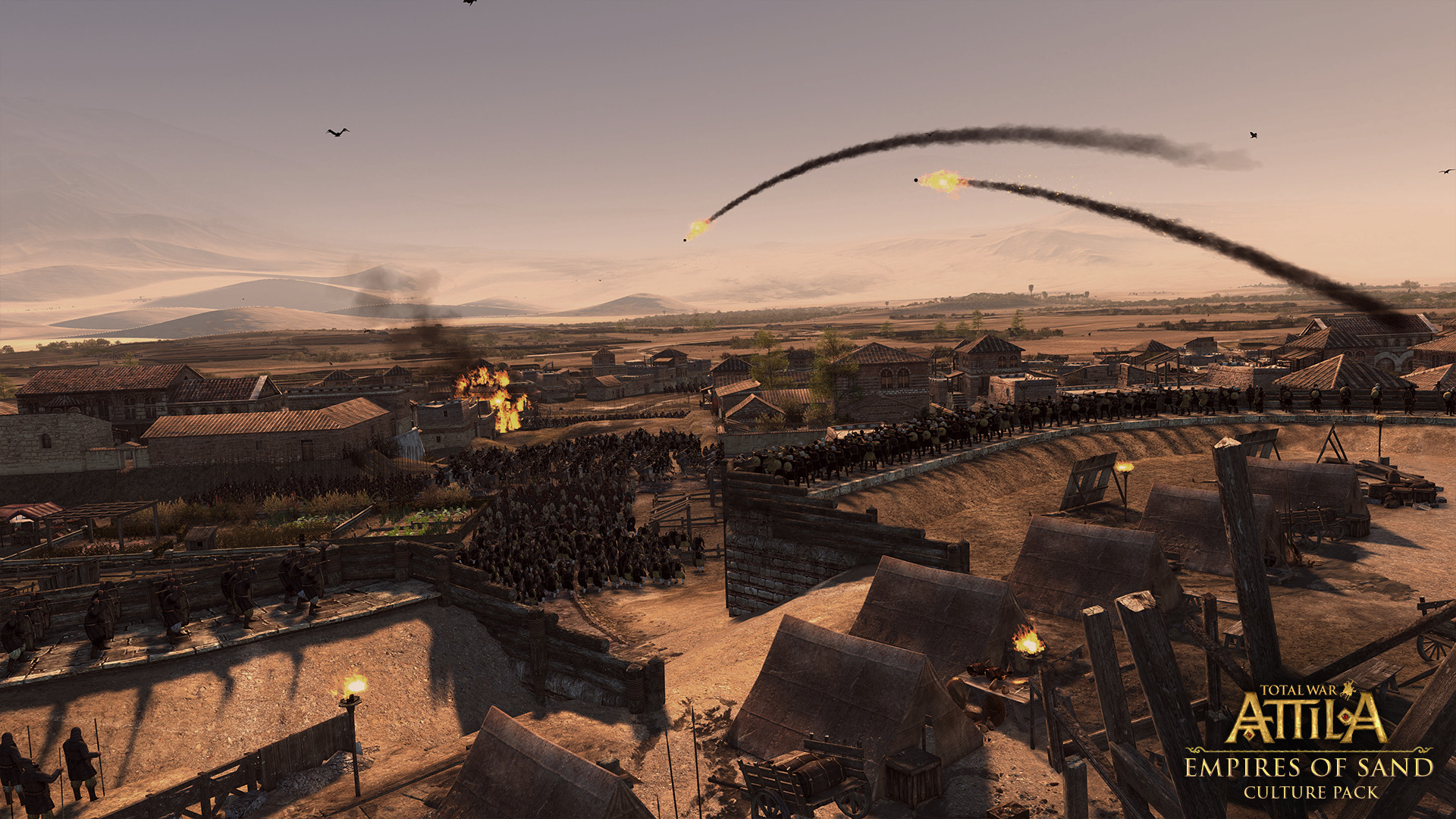 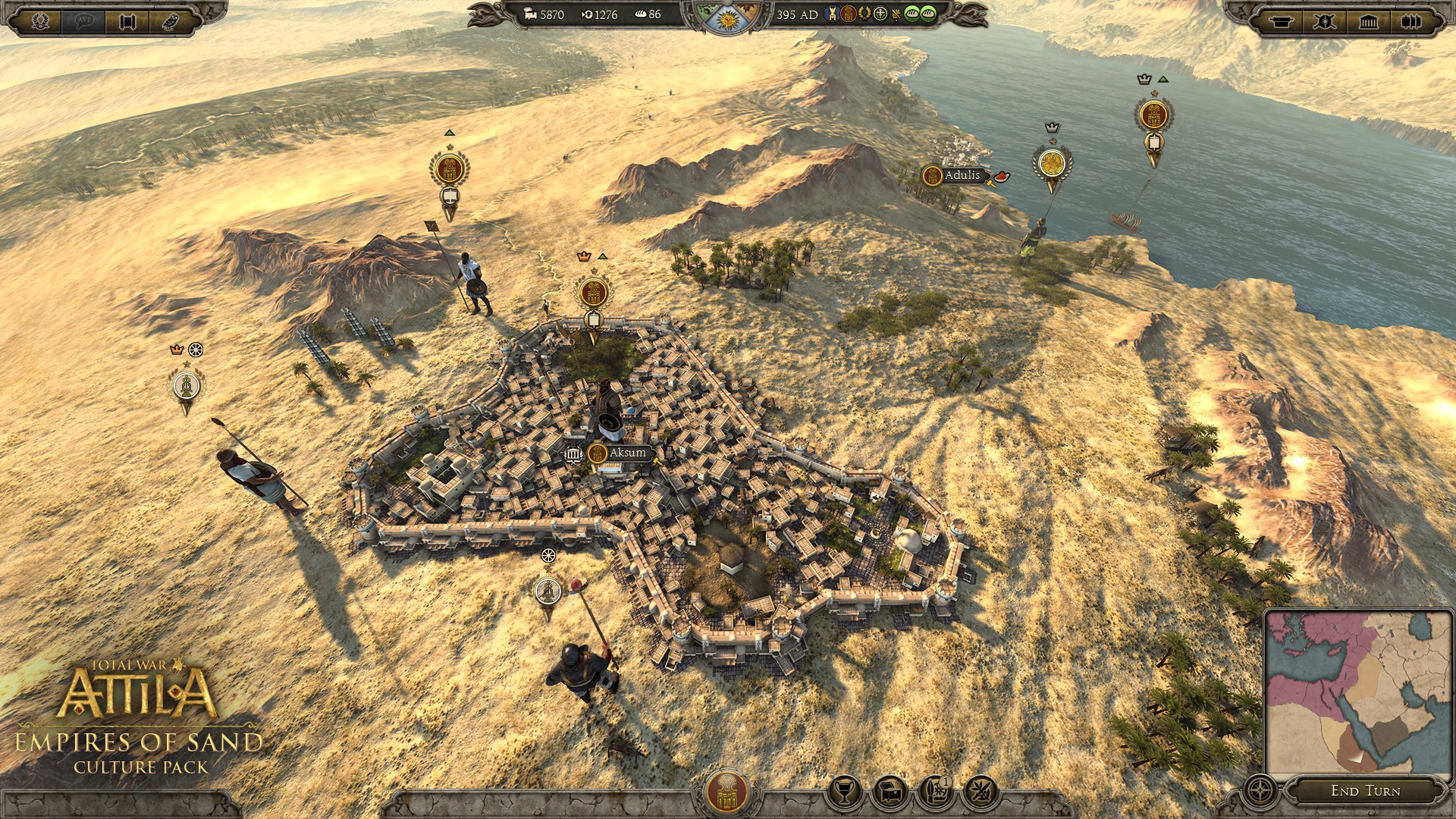 Description:
Attention! To access the content of the add-on, the game Total War ™ is required: ATTILA The Empires ofSand Culture Pack adds the Total War game to ATTILA: ATTILA, three game factions, and new religious features.
New factions of the sub-unit units: the Axumite kingdom, the kingdom of Khimyar and the Tanuh dynasty. These fractions can be used in the in-game online mode of the campaign, as well as in user-mode and network modes.
New campaign mechanics.
New mechanics of the horde.
New religious features.
All three factions come from the deserts of the African deserts and the Middle East. They are part of the cultural group of the Desert Kingdoms and bring the vigra to the new campaign mechanic Jordan, new events, religious characteristics, unique units and squads. Desert Kingdom. All the factions belonging to this culture of the faction have the following features: 2k sanitation at all regions.
15k melee attack in the middle of the desert.
Immunity is a waste of the desert.
New religious features: The supplement includes some changes that increase the importance of religion. There are three new beliefs: Eastern Christianity, Semitic paganism and Judaism. Religion has great influence on many aspects of life, including: construction, victory conditions, technologies, events, campaign bonuses: A double religious construction chain. (for Khimyar and the Asukum kingdom).
This skill will allow you to build independently the branches of your faction, which will allow you to control religious life and react responsively to the changes that are occurring.
Reactionary religious events (for Khimyar and the Auskum kingdom).
Two new events, starting when certain religious conditions are fulfilled, give the player new interesting idilemma missions.
Increased penalty for religious disharmony.
Religious disharmony has a negative impact on the social order of your province. Manage religions competently to minimize risks.
Religious technologies.
Each non-Royal faction of the Desert Kingdoms has a technological chain for each of the main religions. This hides a lot of religious bonuses, and also allows you to optimize your religious choice and take it under control.
Not an easy choice.
The Neordian factions have access to technologies that ensure material well-being, but which do not harm religion. Make your choice, find a delicate balance between material wellbeing well-being.
Religious influence on diplomacy.
New religions have affected the idiomatic component of the game, forcing the player to choose allies, based on the number of non-religious preferences.
Separate conditions for the achievements of the victory.
All three new factions have two sets of conditions for victory (one for each of the main religions), including a certain number of units associated with the seligie.
Barracks level 5.
Khimyar and the Auskum kingdom can build a barracks level 5 (one for each religion). To unlock such barracks, you should have 75% influence in the relevant religion. Such barracks provide access to elite units, and also reveal other significant benefits.
Faction.Tanuh.This Horde faction has an extremely aggressive style of play and has many distinctive features and features: Fractional line: Legendary raiders.
The predatory horde. Food is found faster in the implementation of raids, construction of buildings.
Merged with victory. Every military success spreads the glory of the ovas, which promotes the growth of the horde.
Growing ranks. The armies in the raid state receive one unit of Rebellion Militia in advance.
Features of the campaign: New buildings. During the journey, the faction has access to a completely new