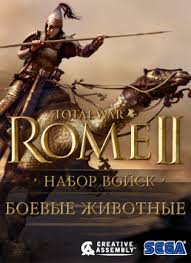 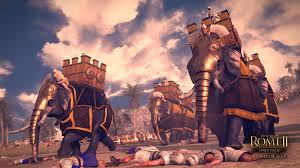 
After the payment order, the system automatically (without us) instantly sent to you

2. Register a new account on Steam or go to an existing one.

With a set of forces "Martial animals" for Total War: ROME II you can truly inspire

primal fear in the heart of any enemy. The kit contains seven new types of units and

makes the choice of the fighters in the game even richer.

Aim for opponents chilling horror, throwing their beehives and pots with

scorpions and snakes, trampled in the dust, sending into battle clad in armor cataphracts

Camel and Syrian mercenaries in armored elephants. And when the enemy will be

broken and the men flee from the battlefield, bait their fierce fighting dogs.

Great Dane. They were used as a watchdog, and as fighting dogs. Virgil wrote:

"When they are on guard, do not be afraid nor night the thief nor the wolf pack or Iberian

robbers behind. " These ferocious dogs differ tireless and never

do not lose track of the enemy.

Humble bee hive occupied an important place in the culture of ancient Greece, although

time. Thriae or "bee virgins" - three sisters-nymphs, were favorites of Apollo and

Poseidon and even whom they had children. Bees are often used in battle: a swarm of angry

insects brought panic and confusion in the ranks of enemies.

In Asia Minor, the most poisonous scorpions are found in the world - their bite can paralyze and

kill a person in just one hour. It is therefore natural that the use of scorpions in the military

actually it was only a matter of time. One can only sympathize with the Roman emperor

The north, the army is on the walls of the Parthian city of Hatra precipitated hit

pots filled with scorpions. As Traian before him, the North could not take the city

even with two throws.

is the battle of Hannibal Barca with a fleet of Pergamum king Eumenes II. Shelling

among sailors and soldiers of the enemy and won. Anyone, who clung

winding venomous snake, will hardly be able to cope with terror and continue to fight!

Macrinus Roman general are not very experienced, but if in the Battle of Nisibis

in 217 BC. e. fought any other commander, he could not have been less than impressed

seen rushing into battle Parthian riders on camels. Dressed in a strong, but

Flexible scaly armor, they were amazing and frightening sight.


Mercenaries in the Syrian armored elephants