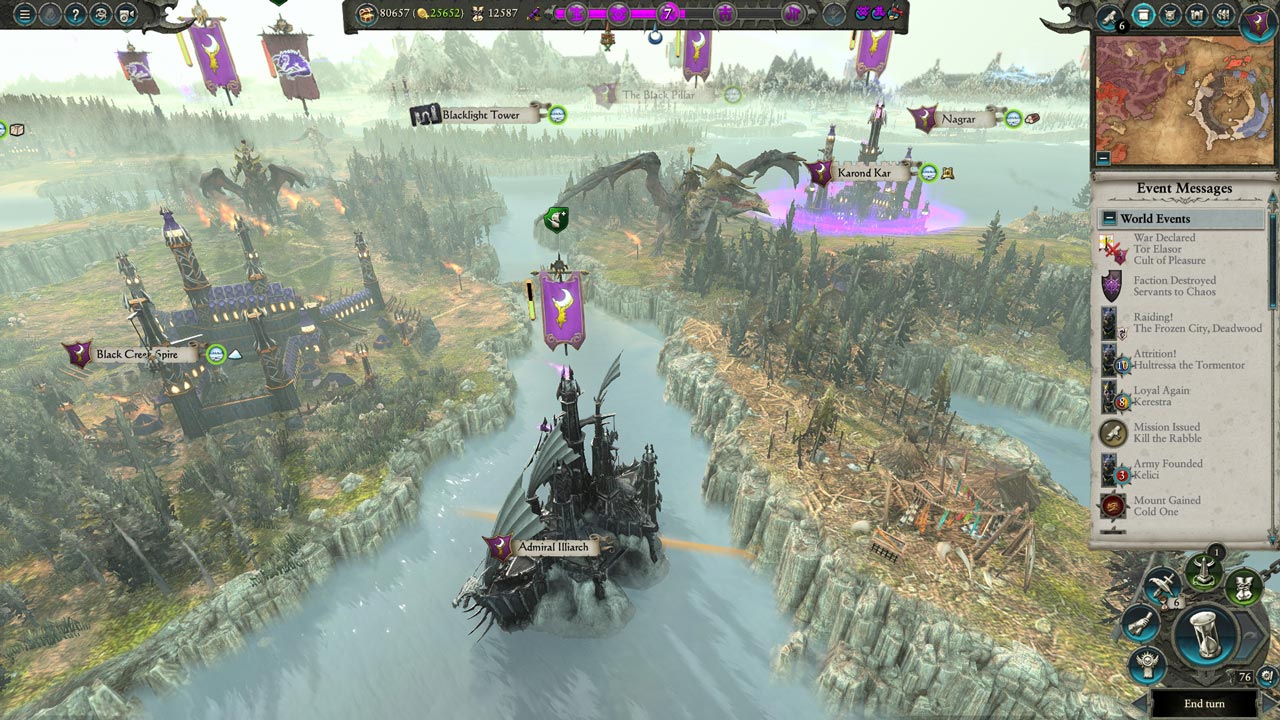 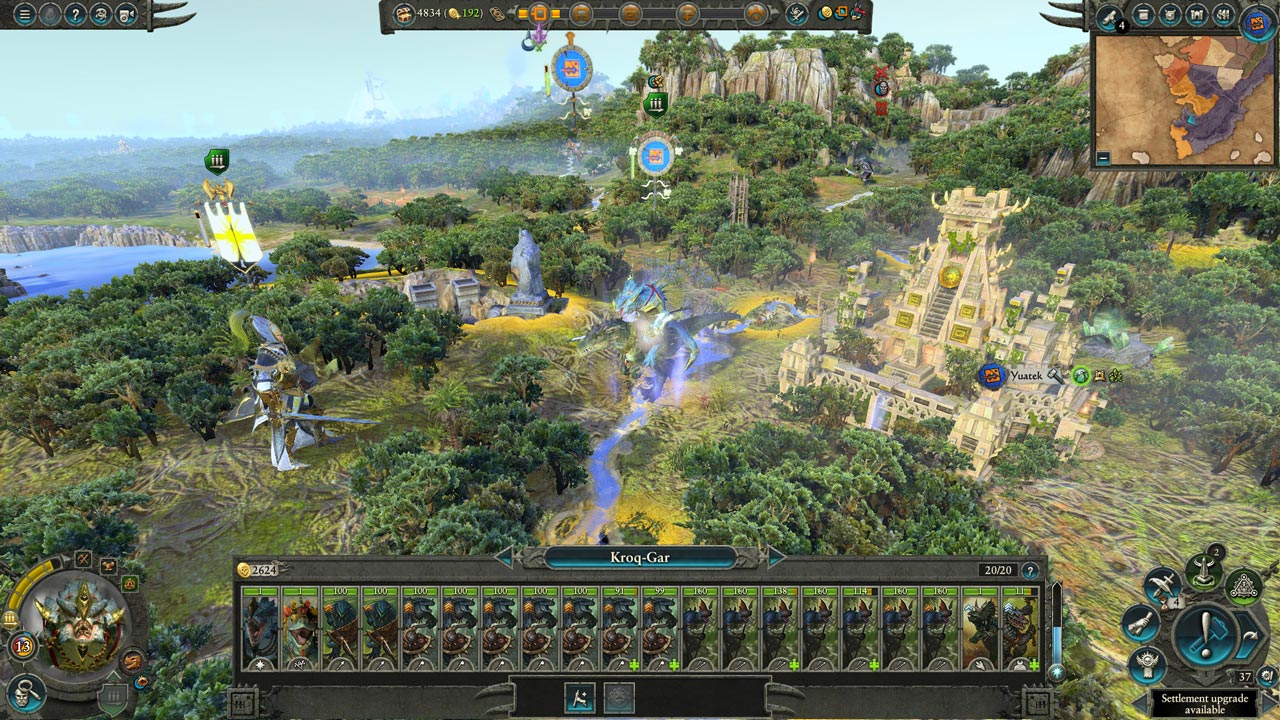 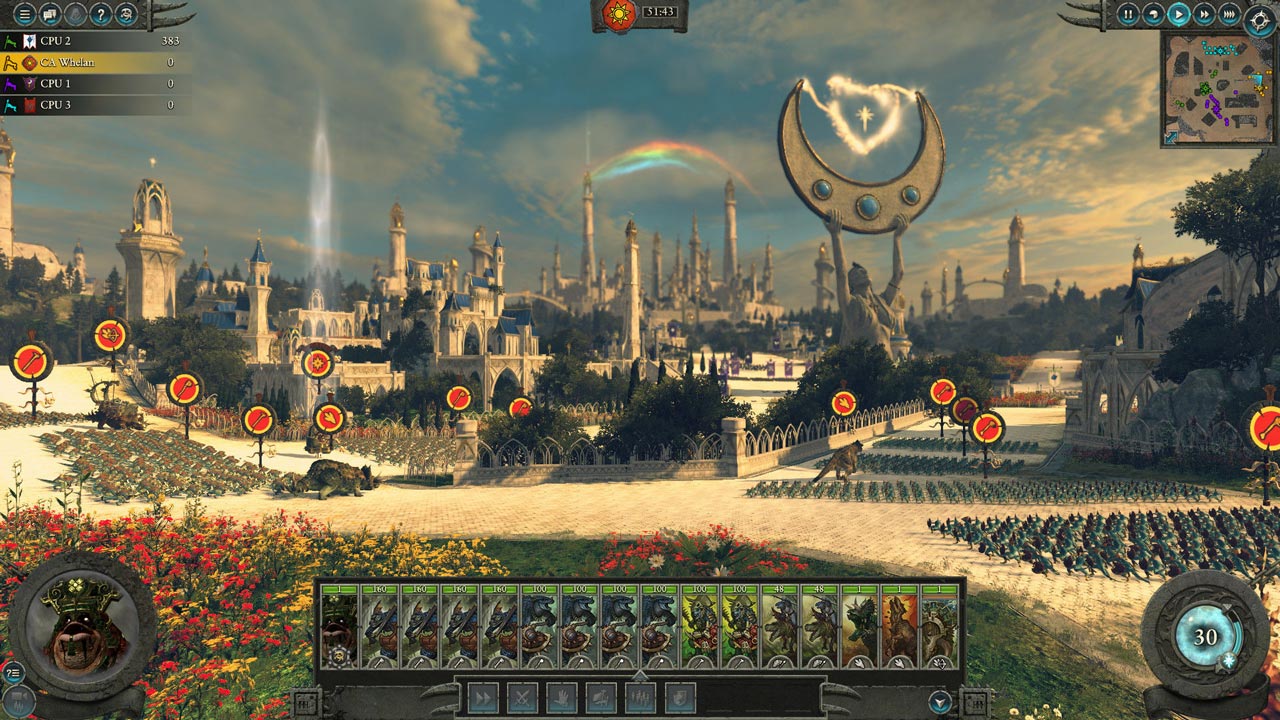 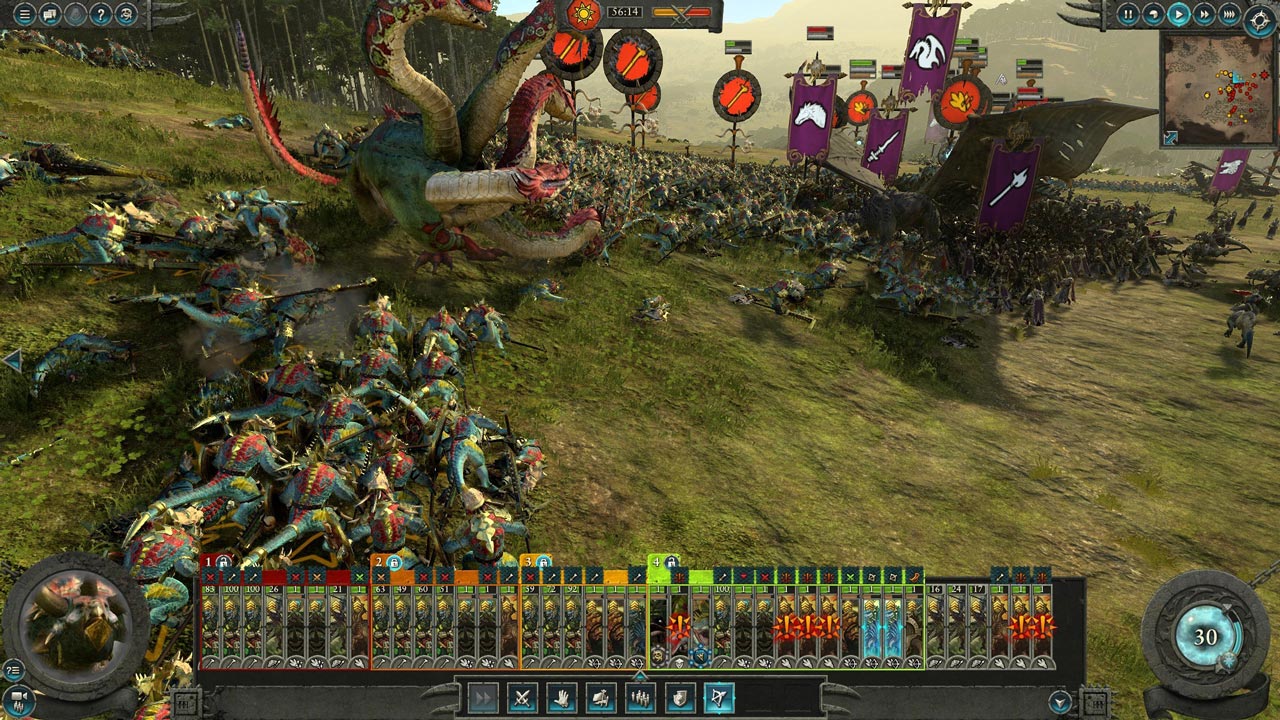 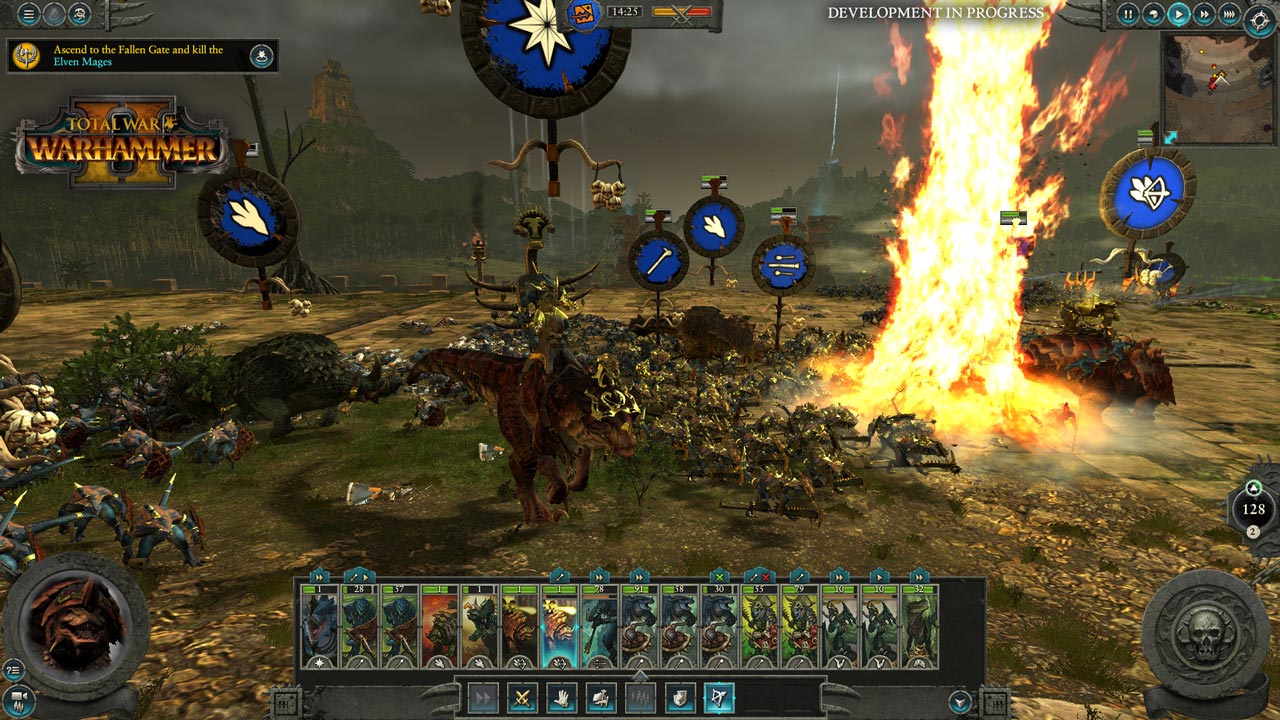 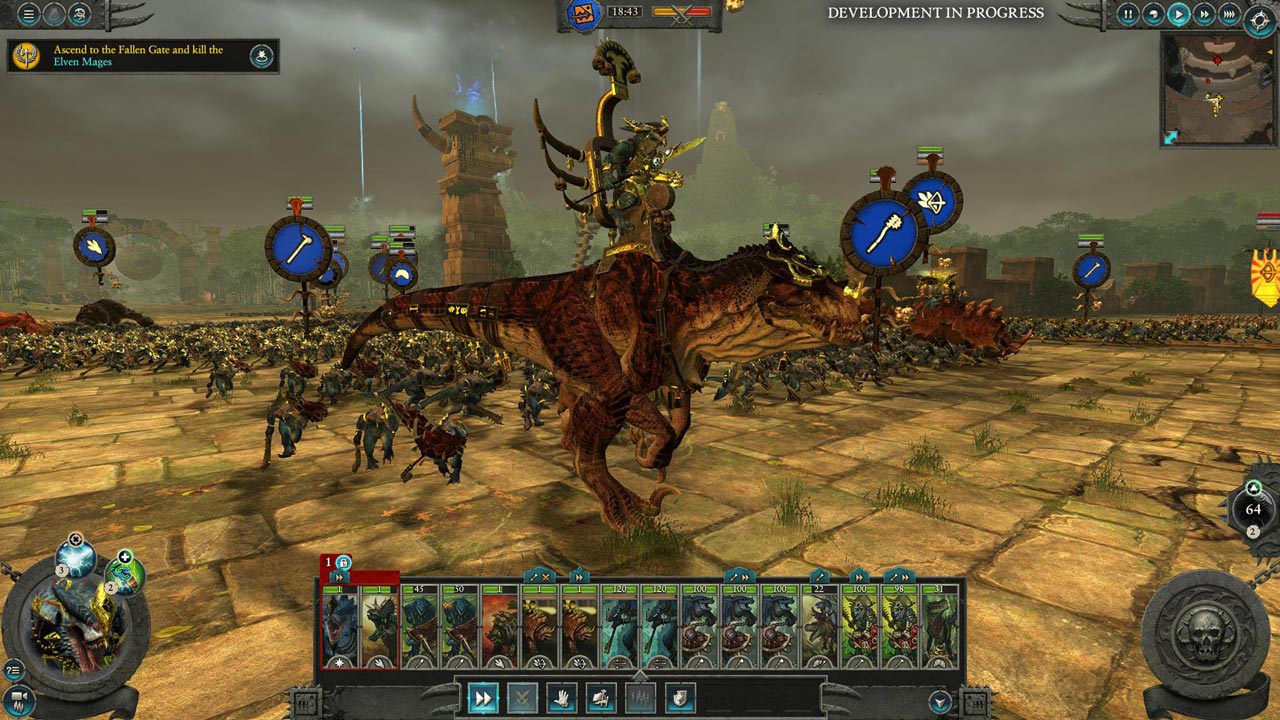 ========================================
Protect your world. Destroy strangers.
Total War: WARHAMMER II is a strategy game of truly epic proportions. You have to choose one of four unique races and start an epic war in order to save or destroy a huge and colorful fantasy world.
The game consists of two main parts - a turn-based strategy campaign in the open world and tactical battles in real time among the bizarre landscapes of the New World.

Global Campaign
Engage in politics, diplomacy, research and military affairs on a turn-based basis. Capture, build and develop cities to recruit and maintain huge armies. Train and arm renowned lords and heroes. Negotiate with potential allies and declare war on those who block your path to your intended goal.

Epic real-time battles
Command armies of thousands in intense tactical battles. Throw fire-breathing dragons and other bloodthirsty monsters into battle, use spells of colossal power and time-tested tactics or crush the enemy with numbers - the method is not important, only victory matters.

Total War: WARHAMMER II is the second part of the trilogy, which began with the cult game Total War: WARHAMMER. In it, players will experience a new exciting campaign "The Great Vortex", which takes place on the vast continents of Lustria, Ulthuan, Naggaroth and the Southern Lands. As the plot progresses, her action becomes more intense, in the end to come to an epic ending, the likes of which has not yet been in the Total War series.
The player will enter the role of one of eight legendary lords who will lead the four iconic races of the Warhammer Fantasy Battles world. To stabilize or finally destroy the Great Vortex, he will need to perform a series of arcane rituals and stop all attempts of rivals to do the same.
...
Shortly after launch, all users with simultaneous ownership of the original game and Total War WARHAMMER II will have access to a third campaign of colossal proportions. On a common map that unites the territories of the Old and New Worlds, players will be able to lead any of the races available in both games to victory.

Conquer the world together
All races of Total War WARHAMMER II will be available in single and multiplayer campaign, as well as in own and online battles.

• Prince Tyrion, Defender of Ulthuan, rules the High Elves who are desperate to stabilize the Great Vortex raging over their continent
• Mage-priest Slann Mazdamundi, seated on a throne-palanquin, sends armies of his lizardmen north from Lustria
• Witch-king Malekith orders cruel hordes of dark elves to leave Naggaroth and the sinister Black Arks
• The Skaven, led by Quick Gnawer, are hiding in anticipation. From their crowded underground cities, they gaze hungrily at the riches of the surface
• Four races, four paths, one goal: to subdue the Great Vortex in the name of good or evil

1. You need to download and install Steam http://steampowered.com/download/SteamInstall.msi (if not already installed)
2. Launch the Steam client
3. Create a new account on Steam or go to an existing one
4. Go to the "Games" section and select "Activate on Steam"