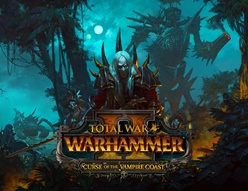 !! INSTANT DELIVERY IMMEDIATELY AFTER YOUR PAYMENT IS CONFIRMED !!

After payment of the order, the system will automatically (without our participation) instantly send you a link to your email to access the official activation key for additional content for the game Total War: Warhammer II - DLC "Curse of the Vampire Coast"

In Lustria, night falls. You are standing on the pier, peering into the thickening fog. Listen! The jungle behind you is quieting down, and a strange, splashing sound comes out, as if a rotten rigging spanks on a moldy mast. The sound becomes louder, and soon a growl of dried sips is added to it, displaying either a sailor´s or a funeral song. The noses of monstrous ships emerge from the darkness, and you understand that stinking winds have brought rotting ships of the Vampire Coast to your harbor! Run. Run as fast as you can! For holding this power is impossible.

Lord Luthor Garcon was the first to take the narrow isthmus on the east coast of Lustria. Since then, there are full of the dead who come to life in the jungle or go into the Great Ocean in pirate raids. But the mad Garcon is not the only inanimate admiral on whose ships are collected zombies, guardians of the depths, sirens and gloomy ghosts. There are other pirate lords who have driven countless corpses and undead into eternal service.

These cruel sailors have long plowed the oceans, collecting tribute in blood and gold. But now, when the Whirlwind of Ulthuan is weakening, the captains have few ordinary treasures: the sea stores a harpoon of star metal, and with this incredible weapon you can subordinate even the greatest mewirm to your will!

A set of campaigns includes the following:

4 new legendary lords - lords of the undead,
New School of Magic: "The Wisdom of the Deep",
The new game mechanics system in the campaign,
Unique upgradeable ships for every legendary lord,
Eight new famous units
A unique technology tree that unlocks the four new Lords of the Vampire Coast,
A system of naval posts that encourages undead admirals,
New units: lead into battle the nightmarish creatures of the ocean, underwater creatures with huge claws, ghostly monsters and hordes of zombie pirates armed with muskets,
The Vortex Center and Mortal Empires campaigns include new factions of the Vampire Coast. However, they do not participate in the struggle for the Great Whirlwind: they have their own goals and objectives ...

Total War: WARHAMMER 2 - The Twisted and The Twilight