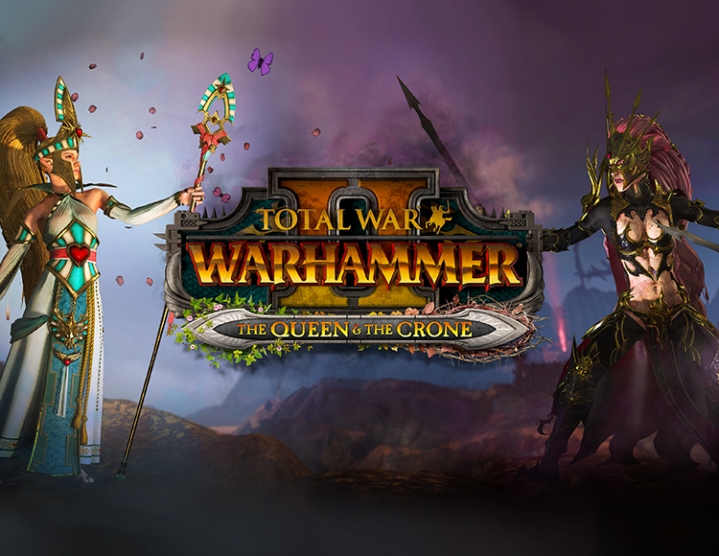 Description:
Attention! To run, you need to have a game of Total War: WARHAMMER II.The Queen & amp; The Crone is the first set of lords for Total War: WARHAMMER II. He strengthens the high elves and the dark elves, adds to the game famous rivals and new legendary units from the world of Warhammer Fantasy Battles, which can be used both in the campaign and in battles. The materials of this kit are available in the "Vortex Center" and "Mortal Empire" campaigns. But that´s not all! Druchii has a dark and powerful weapon ... When blood flows in the rivers and the air is saturated with death, the chains are torn and this monstrous mystery will be revealed. Two new legendary lords ... ... with new chains of tasks, magic items and skill trees: New goals and mechanics campaigns
New type of hero for high elves
The new type of lord for the Dark Elves
New troops for both races
16 elite famous squads
Prehistory: Only in a moment of mortal danger The eternal Queen Alariel, the living embodiment of Isha, goes out to the battlefield. Its sacred duty is to protect Ulthuan and its inhabitants from any manifestations of filth. In obedience to the call of the queen, her servants, the Sisters of Avelorn and even the spirits of the forest themselves are going to fight! Meanwhile, darkness is gathering in Naggarot. In Har Ganet, the witch Hellebron is preparing to arrange the Night of Death. On this night, the city´s residents release thousands of slaves to the streets and kill them. Hellebron bathes in the rivers of blood and gains unprecedented power. Under her banner, the Sisters of Massacre and the Wizards of Fatal Fire are flocking. The Asuras will certainly pay for their betrayal! The new legendary lords: Alariel Shining
Alariel commands the upper elves of Avelorn and draws strength from nature itself. Traveling in the elven lands, she brings great joy to her subjects, improving public order and reducing the level of filth. But over her are the burdens of the mortal world - when Chaos enters the world, the fighting power of the queen is weakened. To restore her strength, you need to destroy the army of Chaos. Alariel uses the spells of schools of magic of life and higher magic. The queen can go in search of her legendary object, the Star of Avelorn, and is able to saddle the elven horse, the horse in the armor of the armor, and the Great Eagle. She can also hire forest spirits: the Dryad, the Drevolids and the Ancient. Alarieli also has a unique campaign mechanic called "Defender of Ulthuan." Its sacred duty is to protect the outer and inner lands of the high elves from invasion. If there are no enemies in these territories, elves gain significant advantages. But if the enemies desecrate Ulthuan with their presence, the asuras lose faith in Alariel, which leads to negative effects. Alarieli has a unique ritual: "The Call of Lileat." The conduct of this rite gives a number of advantages to the Servants, the Sisters of Avelorn and the Dryads.
Witch Hellebron
The queen-witch Hellebron heads a unique faction - the bloodthirsty dark elves of Har Gunet. From time to time, she can arrange a bloody Night of Death, destroying her slaves and gaining strength. If such nights are not held regularly, Hellebron weakens. When the Night of Death passes, the dark elves nearby draw an army under the banner of the Hellebron witch and go to the Bloody Journey. The witch gets the booty that this army takes in battle. Hellbroke pays much less for the content of the Elven witches, the torturers of Har Gunet and the Sisters of the Massacre, and can also improve them thanks to a unique tree of skills. The witch can go in search of his legendary pair weapon - the Sword of Death and t

Total War: WARHAMMER II The Warden and the Paunch STEAM