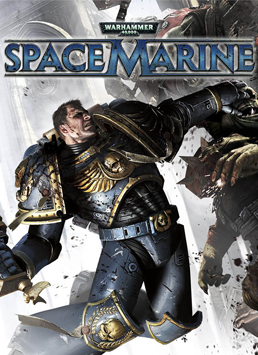 Uploaded: 04.12.2019
Content: Warhammer 40000 Space Marine_11.txt 0,24 kB
Loyalty discount! If the total amount of your purchases from the seller GameCod more than:
If you want to know your discount rate, please provide your email:

You are a Space Marine, an elite warrior of humanity, the last line of defense between humans and their enemies. Extensive genetic changes, psychochemical tests and years of harsh preparations, deadly for ordinary people, made the Space Marine a superman.

The Horde of bloodthirsty Orcs invaded the forge-planet, where military machines for the Imperium of Mankind are produced. The Space Marines, a seasoned veteran of the Order of the Ultramarines, Captain Titus must with his detachment retain the defenses before the attack force of the Imperial Navy arrives. On the side of the enemy - a huge preponderance in numbers, on the side of people - the best fighters and powerful weapons. The loss of the planet will give the Orcs weapons capable of wiping whole cities off the face of the earth. There will be no excuses for defeat, and the Space Marine is ready to stand to death, but something even more evil and eerie lurks in the shadows of this world.

GAME FEATURES:
- Epic and brutal action / RPG, in which you will dress in the armor of the Space Marine and attack the multiply superior forces of the Orcs and Chaos.
- Burn the heretic, kill the mutant, pursue the evil spirits. Burst into the very thick of the battle. We do not sit behind cover, we go on the attack!
- Yes, our enemies are afraid of us, for we are the Emperor´s wrath! The new combat system allows you to easily switch from large-caliber guns to crushing blows with a sword.
"To the flame of the battle, to the anvil of war!" Feel the breath of the universe of Warhammer 40.000 in gloomy and atmospheric landscapes, in incessant battles and twisted storylines.
- Success is measured by the blood: yours or your enemies. Battle online on the side of the Space Marine or Chaos in matches 8 to 8. Discover new weapons and armor for different classes of characters. We do not die - we go to hell for regrouping.