World of Warcraft Mists of Pandaria 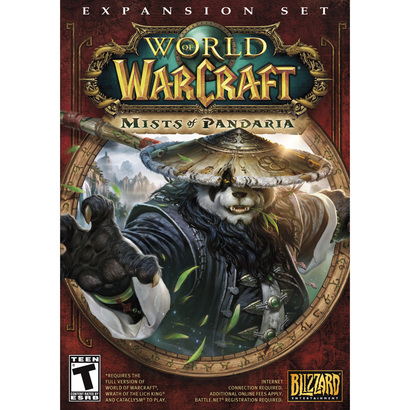 wowdealer information about the seller and his items
offlineAsk a question

EVERY **** ****
The buyer after the purchase of the game World of Warcraft Mists of Pandaria, get on your Email, given when purchasing the goods, guest pass for one of the popular online game .Rassylka keys made within 48 hours.

You buy the official activation key, the game World of Warcraft: Mists of Pandaria as a code.

Caution
- This key does not extend playing time and is suitable for use only on Russian servers World of Warcraft.
- To start the Mists of Pandaria you must have installed the original game World of Warcraft with all previous additions.

More than ten thousand years, the ancient land of Pandaria were shrouded in fog and hidden from the other inhabitants of Azeroth. This saves them from the wars from the time of the split of the world. In pandariyskih dense forests and mountains, peaks that go into the clouds, live various indigenous peoples and strange beasts. It is from here originally Pandaren - mysterious Epicureans, who manage to enjoy life, even when hovering over the world an ancient evil.

New Continent is tormented world in a desperate moment when the Horde and Alliance are on the verge of a new war that threatens to overwhelm and destroy Azeroth. It will be found there in the mists of Pandaria key to saving the world? Or in a power struggle over these rich and wonderful lands of the feud breaks out worldwide, which will lead to the destruction of all life? Answers can be found on the banks of the mysterious Pandaria!

Features:
- A new race - Pandaren. Play as new character races of the Horde and the Alliance - a mysterious and noble Pandaren. Before you brought the mysteries of an ancient, mysterious land of Pandaria, homeland Pandaren.
- A new class - Monk. Among the classes of World of Warcraft will be a new - a monk. Expand its combat potential!
- Test mode. Try a new testing regime, compare your results with the results of time-consuming other players. The most nimble great rewards await!
- Selection of talent. With the new system the talents your character will be quite unique.
- Fractions. You will get acquainted with the ancient Order of the Arts and unusual artisans: brewers, storytellers, breeders kites and many others. Earn their trust, and in return you get the rare and invaluable favor factions.
- "Battle Scenario" (coming soon). You are coming epic battles and trials of unprecedented complexity. Meet them shoulder to shoulder with friends.

This product is distributed through the digital distribution, it represents the only pin and does not contain any packages and boxes.

Related to item "World of Warcraft Mists of Pandaria":