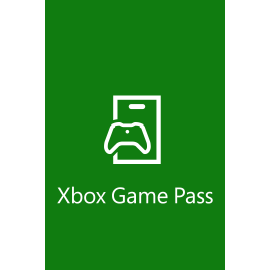 Evidance information about the seller and his items
onlineAsk a question

LICENSE KEY FROM Xbox Game Pass 30 Days DISPLAYED IN THE BROWSER WINDOW AND COMES TO YOUR E-MAIL ADDRESS AUTOMATICALLY AFTER PAYMENT !!!

Activation: XBOX ONE
Region: No regional restrictions where Xbox Live is available http://www.xbox.com/en-US/live/countries (for example, Xbox Live isn´t provided in such countries as Cyprus and Ukraine)
Language: English


Xbox Game Pass is a subscription to games for Xbox One, Xbox Play Anywhere and Xbox 360 (with backwards compatibility) for Xbox One consoles. To access the games you need an active subscription. Games included in the subscription may change over time, may depend on the country and may not be available in all countries.

With Xbox Game Pass, you will always have something to play. Find and download games that you have long wanted to play, including the legendary old editions in the highest quality, with no problems with streaming or connection. Enjoy the games of all genres, such as action movies and adventures, as well as family games, hard shooters and sports simulators. Do you like the game for Xbox One, which is in the catalog, and you want to purchase it? Buy it and save 20%, and get an additional 10% discount on any addition to the Xbox One game in the catalog. Xbox Game Pass - is access to the directory, in which every month new games are added.