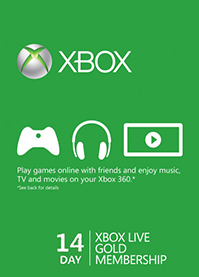 After payment, you will receive one code for your Xbox Ultimate subscription (Xbox Live Gold 14 days + Xbox Game Pass 14 days)

to activate the code, the current gold and Game Pass subscription must end

Activation via the Xbox console or via the website. Owners of Xbox 360 consoles must activate the code via the Xbox website or app

Works on both old and new accounts

the
Product can only be activated if the gold status is over. If your account has a gold status, wait until it ends and then activate the product.

Xbox Game Pass is a subscription to games for Xbox One, Xbox Play Anywhere, and Xbox 360 (backward compatible) for Xbox One consoles. An active subscription is required to access the games. Games included in your subscription may change over time, may vary by country, and may not be available in all countries.

With Xbox Game Pass, you will always have something to play. Find and download games that you´ve been wanting to play for a long time, including legendary old editions in maximum quality, without any problems with streaming or connection. Enjoy games of all genres, such as action and adventure, as well as family games, hard shooters and sports simulators. Do you like the Xbox One game in the catalog and want to buy it? Buy it and save 20 %, and get an additional 10% discount on any Xbox One game add-on in the catalog. Xbox Game Pass-access to the catalog, which adds new games every month.

To activate the key:
1. Go to the site http://www.xbox.com;
2. Click "Sign In" in the upper-right corner;
3. Log in with your Xbox account;
4. Follow the link: https://redeem.microsoft.com and activate the purchased key.
*********
Please do not leave a negative comment before contacting the seller. In most cases, the problem will be resolved after the seller reads your message. Thank you for understanding!