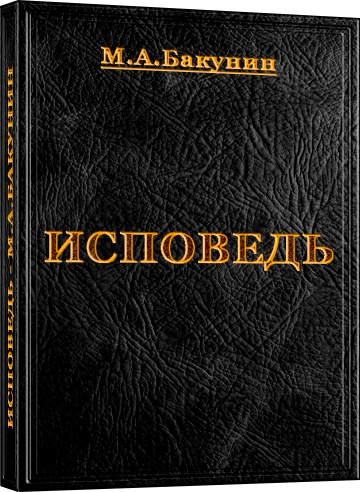 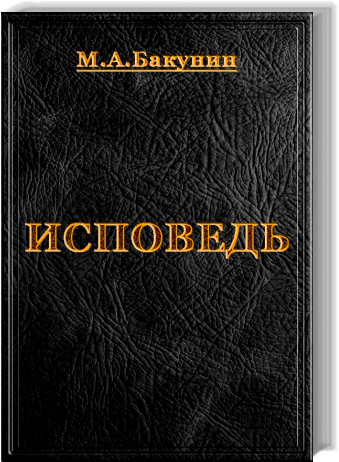 Revolutionary writing to the king, and the king himself asked him about it. "My heart says to the heart ..." - Nicholas I demanded that the arrested person is the enemy of autocracy "candid, frank and detailed confession." "Sinner" was sitting in prison raw, and much of a choice he was not. And when "these people are asking" how are you to him, crowned, refuse, especially if it is your jailer?
Russian revolutionary Mikhail Bakunin wrote his "Confessions" in 1851, as a prisoner of the fortress. Initially it was assumed that this manuscript is only one reader - the Russian Emperor Nicholas I, who demanded that Bakunin´s confession in all political sins.
Autobiographical narrative covers the period from Bakunin departure abroad in 1840 and prior to his arrest in 1849 and the issuance of the Russian authorities. The lion´s share of these events falls on the 1848-1849 years, when all of Europe was shaken by revolutions and uprisings, in which the author took an active part. That report Bakunin about this period of his feverish activity most interested autocratic addressee and reader of the manuscript.
The story of "apostle of anarchy" of his innumerable subversive plans and trying to implement them on the verge of action-packed adventures and adventurous comedy, teeming with pearls like this: "I have instructed Straka brothers make a quick secret societies in Prague, not adhering strictly old plan, for which performance has already missing more time, but focusing the main attention in order to prepare it as soon as possible to revolyutsionernomu movement; especially asked them to have a relationship with employees and make gradually of the most loyal people force consisting of 500, 400 or 300 people, possibly born revolyutsionernogo battalion to which I could certainly rely and which would have to master all the rest of Prague, less or completely unorganized elements. " So you see how Bakunin rushes in the Old World, taking more and more frantic attempts to organize at least some upheaval.
Only that he wanted all his life - to gather around him more or less a "fugitive elements", organize them, and a club to bring down on the heads of all the crowned monarchs of Europe to one.
"Confessions" gives a complete picture of the political views of Bakunin and projects that have been so far removed from the modern European version of anarchism, even surprising that many of the current "anarcho" Mikhail Alexandrovich continue to calculate in their ideology.
He was a Slavophile (the first Russian who took the side of the Poles, stressing at the same time it is on Slavic solidarity against the autocracy), could not tolerate the German philosopher Hegel and personal (very personal!) Marx, and the Germans in general. The "Confessions" Bakunin writes constantly about their Russian nature and rejection of the entire German. In the future, it will enter into competition with Marx for leadership of the world socialist movement. Obsessed conspiracy Russian rebel who always wanted to spit on the economy will be supported by socialists of southern Europe, especially Italy, whose inhabitants are known for their passion for conspiracies. A "for" Marx the economist "will take" all Protestant Germany and the North of the continent. Bakunin believed that freedom from tyranny comes from the East, from the Slavs, and the West is rotten and exhausted ...
This publication is available only in electronic form on the user´s choice, in two formats and Pdf Swf - with page turning effect.

Mikhail Alexandrovich Bakunin
Biography
Mikhail Bakunin (18 (30) in May 1814, with Pryamuhino Novotorzhsky uezdaTverskoy lips -.. June 9 (July 1) 1876 Bern, Switzerland), Russian revolutionary, publicist, one of the founders of anarchism, the ideology of populism.
Life and struggle
He was born in an old noble family. From 1829 he studied at the St. Petersburg Artillery School, but in 1834 was expelled for daring chief school. Then he served in the artillery units. In 1835 voluntarily left the service, almost been arrested for desertion. From 1835 he became a member of NV Stankevich circle, met with VG Belinsky and AI Herzen. Influenced Stankevich interested in Kant and Fichte, and Hegel´s philosophy. In 1840 he went to Germany, attended the lectures of Schelling in the University of Berlin. Here he met with the Young Hegelians left (A. Ruge, etc..). In 1842 in the journal A. Ruge "German Yearbook of Science and Art" published an article "The reaction in Germany", which recognized the need for "a complete destruction of the existing political and social order" and asserted that "the passion for destruction is at the same time creative passion. " In Zurich, he met with the utopian socialist W. Weitling and his theory of egalitarian communism. In February 1844 the Russian government demanded that Bakunin returned to Russia. Because of the failure to comply with this requirement, he was stripped of his nobility, all the rights of the state and sentenced in absentia to exile in Siberia. While living in Paris, Bakunin became close to P. Proudhon, became acquainted with K. Marx and F. Engels, translated into Russian "Communist Manifesto." Since the mid-1840s. Bakunin advocated a federation of Slavic peoples, participated in the liberation of the Slavic organizations. In 1848 he wrote a manifesto "Russian patriot appeal to the Slavic peoples", in which he called for the overthrow of the Habsburg Empire and the creation in Central Europe a loose federation of Slavic peoples. In 1848-49 was one of the leaders of the uprising in Prague and Dresden. After the defeat of the Dresden uprising (1849) was arrested as one of the rebel leaders sentenced Saxon court to death, commuted to life imprisonment. In 1850 he transferred to the Austrian authorities, imprisoned in the fortress. In 1851 issued by the tsarist government and was taken to St. Petersburg, where he was imprisoned in the Peter and Paul Fortress. At the request of Nicholas I, Bakunin wrote "Confessions" (opubl.1921). In shape it was in the nature of repentance, however, according to Chairman of the State Board of AI Chernyshev, had "no shadow of a serious return to the principles of loyal". Bakunin spent six years in Schlisselburg fortress. By order of Emperor Alexander II was exiled to Eastern Siberia, he lived in Tomsk and Irkutsk. In 1861 he received permission to ride down the Amur. When they reached the sea coast, Bakunin moved to the American ship bound for Japan, then across the US arrived in England. In London, he worked in the "Bell" Herzen, with which soon dispersed (Herzen denounced political adventurism Bakunin). He participated in the Polish uprising (in early 1863). In 1864 he settled in Italy, where he founded the first anarchist organization "international fraternity". In subsequent years, Bakunin tirelessly to create a network of secret revolutionary societies in Europe, participated in the Lyons uprising (1870), led (1874) speech anarchists in Bologna, etc. In 1869 friends with SG Nechayev he took part in his conspiratorial activities, published together with him "People´s massacre" magazine.
However, after the exposure of GA Lopatin Nechayev broke with the latter. Despite his illness, and the difficult financial situation, Bakunin to the very end of his life he maintained a resistance of revolutionary convictions, wrote appeals and proclamations, planned revolutionary new shares.
With a short biography and bibliography of the author can be found in

The key to the case study "Operation Breakthrough» - CS: GO