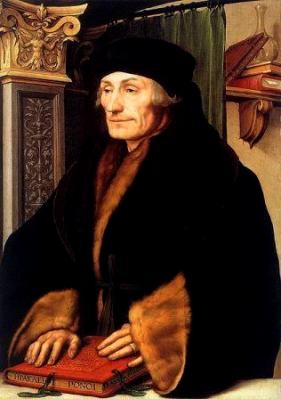 "Praise of Folly" ("Eulogy of Folly"; "Moriae Encomium, sive Stultitiae Laus") - one of the central works of Erasmus of Rotterdam. The book was written in 1509 and published in 1511. All were released about 40 lifetime editions of satire. "Praise of Folly" owes much of its existence to the long journey of Erasmus in Europe. The idea of \u200b\u200bwriting such a work has matured him on his way to England, and upon arrival to his beloved friend, Mora, Erasmus practically a few days to realize his purpose in life. Satire written in the genre of ironic eulogy, which was due to a combination of the two trends, characteristic of the Renaissance: an appeal to the classical authors (so eulogy) and the spirit of social criticism lifestyle (so ironic). It should be noted that Erasmus took quite widespread in the late Middle Ages way of stupidity. Suffice it to recall occurred "Festival of Fools", carnival procession with masked, served discharging social and psychological tension. Erasmus himself looked on his work as the literary trifle - but his literary celebrity, and his place in the history of this trifle he owes at least no less than his multi-volume scholarly work. Most of the latter, have rendered service at the time, long ago doth rest in the stacks, under a thick layer of dust a century, while the "Praise of Folly" is still going to read, relatively few in Latin script, but you can tell everyone in translations available in real time in all European languages, and thousands of educated people continue to read out this ingenious witty joke of scientists and scientists from the witty people, some only know the story of World Literature. Since the advent of the printing press, it was the first time a truly enormous success of the printed product.