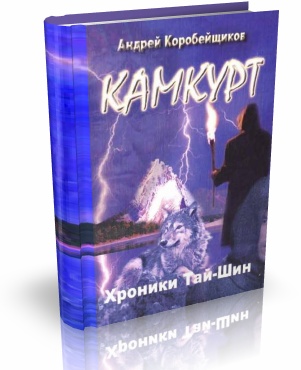 The novel is written as the legend "kaichi" - Altai tellers that is the basis of spiritual quest of many contemporaries. It is a tale of power, which it is impossible to understand the mind, and can only be felt. This is the story of a great love and a great battle, which takes place in the heart of each of us. The saga of the heroic battle of our World ...

Initially, "Kamkurt" ("Shaman Wolf, the mediator between the worlds leading, leader of the pack, a werewolf ..." Turk.) Planned as the final part of the trilogy of art "War Shaman." However, the information contained in it, just gave birth to more puzzles than answers to the questions raised in the first two novels.

Psychics, standing in silent service of the invisible human government. The ancient Scythian goddess, threatening the fate of the world, and hiding in the mysterious spaces in anticipation of their wake. Taishin, the priests of the Goddess, shamans, werewolves and great warriors of Altai. Mysterious black shadows in the near-Earth space and a grandiose underground civilization.

Roman clarifies many mysteries associated with Clan Tai Shin, but maybe leave more questions ... questions the answers to which will be able to give myself only you, if you listen to the quiet voice of your heart.

read the book do not need additional software, unzip the file and enjoy reading!

Problems of legal regulation of restrictions and deprivation of parental rights in the Russian Federation (thesis, 2006)