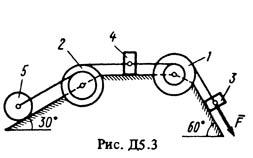 Sold: 0
Uploaded: 23.07.2013
Content: d5-30.zip 27,69 kB
Loyalty discount! If the total amount of your purchases from the seller TerMaster more than:
If you want to know your discount rate, please provide your email:

TerMaster information about the seller and his items
offlineAsk a question

The finished solution of the D5 version 30 of teormeh of Taskbook Targ SM 1988. See Terms of D5 to the problem (p. 52 in the training manual Targ SM): The mechanical system consists of a stepped pulley 1 u2 weight P1 and P2 with the radii of stages R1 = R, r1 = 0,4R; R2 = R, r3 = 0,8R (weight of each pulley assumed to be uniformly distributed along its outer rim); loads 3, 4 and a homogeneous solid cylindrical roller 5 weight P3, P4, P5, respectively (Fig. D5.0-D5.9 Table. D5). The bodies of the system are connected filaments wound on pulleys; Lots of threads are parallel to the planes. Cargo planes glides on without friction, and rollers are rolling without slipping. In addition to the forces of gravity on one of the bodies of a constant force F, and the pulleys 1 and 2 during their rotation a constant torque resistance, which are equal to M1 and M2. Create a system for the Lagrange equation and determine from it the amount specified in the table under "Search", where indicated: E1, E2 - angular acceleration of the pulleys 1 and 2; a3, a4, AC5 - acceleration loads 3, 4 and the center of mass of the roller 5, respectively. When it is necessary to define the problem E1, E2, take R = 0,25 m. One of the weights 3, 4, whose weight is equal to zero, the figure does not depict. Pulleys 1 and 2 are always included in the system.

Immediately after payment online you will be prompted to download the solution of D5 B30 (Figure 3 condition 0) on the theoretical mechanics of Reshebnik Targ SM 1988 for external students. Solution fulfilled by methodical instructions and control tasks for part-time students of energy and other specialties. The decision formalized in format word, packed to the archive zip. By the way, the decision is included in the product at a discount, "Targ SM 1988 decision 10 14 tasks option."

I would be very happy if after passing the solutions you return to the site and leave a positive review. Believe me, for me it is very important.
Thanks in advance.

Constitutional and legal status of the person in the Russian Federation